ONE exhibition at MOSI

Come Check out two pieces I have in the ONE exhibition at MOSI (Museum of Science and Industry). The opening reception is Friday at 7p.m.
MOSI will be hosting the ONE exhibition in the second floor ARC Gallery. ONE is a multimedia art exhibition that explores the concept of “one”. “One” as a number, refers to the integer between two and zero. It could be perceived as unity or an ideological force, such as narcissism, capitalism, or monotheism. Many facets explore the singular; a sole aim, a single life, a solitary form.

The ARC Gallery is located on the second floor and surrounds the IMAX dome theater.

This semester each member of my class gets the opportunity to collaborate their own photo shoot, employing the help of the class. I get to start things off this Thursday and I can’t wait! I’ve decided to emmulate one of my favorite photographers Richard Avedon. I also plan to incorporate a Cindy Sherman-like feel by having my classmates dress up to resemble the rural, rustic, dirty personas in Avedon’s photographs. I will be shooting mainly with a large format 4×5 camera, but will also be taking shots with my digital camera. I will post the pics as soon as they’re developed!

Today I went to the Florida Museum of Photographic Arts (FMoPA) to take part in a talk by one of my professors, Lou Marcus, on German photographer August Sander. Sander photographed most of his work between the two world wars. He was attracted to the human appearance and how an individuals connection with the camera could reveal something about them. Throughout his career Sander used glass plate negatives. He is best known for his portraits which are exemplified in his series People of the 20th Century. The photographs taken were categorized into seven categories by social type and occupation. He allowed people to compose themselves to be photographed in the way that they wanted to be photographed. Sander found his subjects for his photographs by taking advantage of every opportunity he could to photograph. For instance, a bailiff came by his door once to serve him papers and he invited him in and took his picture. That and many others were in a series of images titled People Who Came by My Door. After the Nazi’s suppressed his work he began shooting landscapes. Later a fire destroyed the majority of the remaining negatives. Sander’s work resonates through much of contemporary photography.
The exhibit at FMoPA runs through March 13, 2010. Go check it out! 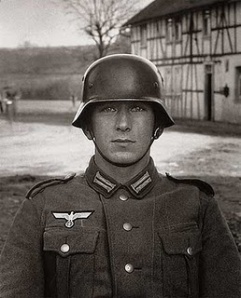 photographer of the week

Matthew Albanese, a photographer and sculptor, creates small scale models that result in very believable landscapes. The the images are captured give the illusion that they are life-size objects. His volcano, Breaking Point, was made from tile grout, cotton, phosphorus ink, and was illuminated from within by six 60 watt light bulbs. Burning Room was made out of wood, nylon, plexiglass, purchased dollhouse furniture, and then was set on fire to achieve the effect seen below. 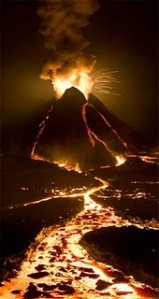