Photographers of the Week

For my final project I am going to continue working in the same small scale as my last project as I really enjoyed it and had a fun time with it. The short depth of field and small scale really brings me into this whole new world that I want to explore further. As previously mentioned, I am abandoning the use of real life objects as a whole, as they take the photos in a different direction that I am not fond of. Essentially my goal is to blend this world in with my own to explore, construct, and answer questions about my own life.

I have been made aware of several other photographers who work on a small scale, such as photographer Lori Nix and photography duo Walter Martin and Paloma Munoz. Lori Nix creates these elaborate scenes that explore death, anxiety, and disaster. The series she constructed entitled Accidentally Kansas is by far my favorite. Nix also incorporates the same small scale in her commercial and editorial work. It’s encouraging to know that she does not have to put on an entirely different hat to create work in the commercial world. Check her out at www.lorinix.com. 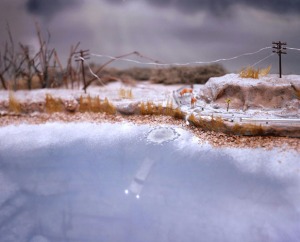 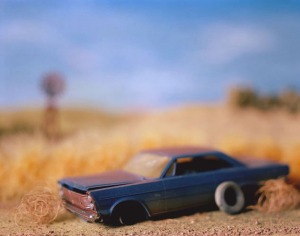 Walter Martin and Paloma Munoz design and create absolutely amazing snow globes that incorporate miniature figurines. The figurines are store bought, reassembled, and then hand painted. Their snow globes are about 6 inches in diameter and depict the figures all alone or at the mercy of others. The way they have created art on such a small scale is astonishing. I admire their simplicity in both their snow globes and past sculptural work. I would love to see their work in person. Check them out at www.martin-munoz.com.