Visiting artists Rebecca French and Andrew Mottershead gave a talk last night at USF. They engage in site specific work based on social rituals. The collaborative duo “create art that specifically explores ideas of identity, social ritual and the everyday public and private realms in which they are played out. Through participatory works, they subvert sites and engage people complicitly in the creative act.” They spoke about several projects, including Borrow Me, a four year ongoing series called Shops, Club Class, 24 Hour Flower Market, and my favorite, The People Series. The People Series solicited people to come together to participate in microperfomances. Each person was given a card with his/her instruction for performance for the night. The instructions including things such as lie to impress, rim your glass, let someone know you were surprised they were invited, (when talking to someone) look over their shoulder and scan the room for someone more interesting, and take a drink out of somebody’s glass. After their performance each participant would sticker their performance with the small numbered sticker they would peel off of their card. In the final stage a key was distributed to allow people to re-trace the performances. Check out these works and more on their website:www.frenchmottershead.com 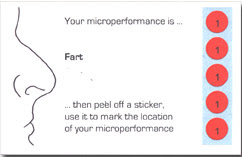